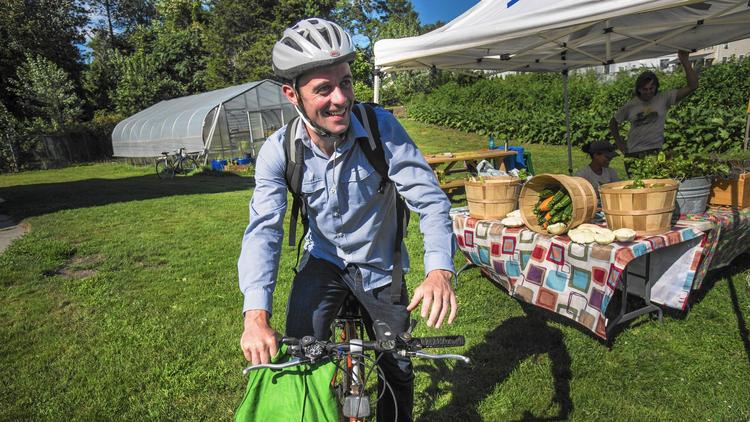 The sprawling brick factory building on Love Lane in Hartford’s Northeast neighborhood epitomizes what ails many inner cities. M. Swift & Sons Co. produced gold leaf there for more than a century, paying taxes and employing as many as 400 people.

When Swift closed its doors in 2005, the last 40 workers were let go; then the building, which had seen better days, began to deteriorate in earnest. It has no heat, electricity or water. The copper is long gone, but the hulking machinery, Jurassic-like, remains. Floorboards buckle underneath where the roof leaks. The main brick factory building — there are six structures in all on 2.6 acres — sports three massive metal vaults, one per floor, where the gold was kept. The foot-thick doors are wide open.

Every step of the tour led by Patrick McKenna is an adventure. He doesn’t dwell on the holes in the floors or standing water after a recent rain. He points out where a commercial kitchen will go and a space that is ideal for a health facility to serve the neighborhood’s 10,700 residents. He says that there could be a mini-museum about Hartford’s rich manufacturing tradition in the machine room, with the rusting behemoths as exhibits, and that there is plenty of room to lure a branch of the Hartford Public Library. There will be, as they say, much more: food-service job training, jobs created by food industry tenants, and spaces for local entrepreneurs, community activities and sister nonprofits.

The ambitious goal is to bring this industrial dinosaur, a la Spielberg, back to life, to enliven the Northeast area, the poorest of Hartford’s 17 neighborhoods.

McKenna, who is an architect and the Swift project manager, has been on the job for barely a year. “The goal is to have the design finished at the end of 2015 or early 2016 and have construction begin soon after on renovating the core and shell of the main building,” he says. “Within two years it will be ready for tenants.”

He clearly sees this proud dilapidated relic with his heart as well as with designing eyes.

In 2010, the Swift family donated the complex to Community Solutions, a national nonprofit founded and headed by West Hartford native Rosanne Haggerty. With grants in hand totaling $2 million, Haggerty hired McKenna away from an Essex architectural firm not only to be project manager for the resurrection of the buildings, but also to oversee community outreach efforts, such delivering health services to the neighborhood and improving vacant lots that litter the streets. Some of the lots fell into disuse after the 1968 riots following the assassination of Dr. Martin Luther King, Jr., and plans for them include establishing community gardens.

Analysis: We May Not be Ready to Help Homeless Veterans