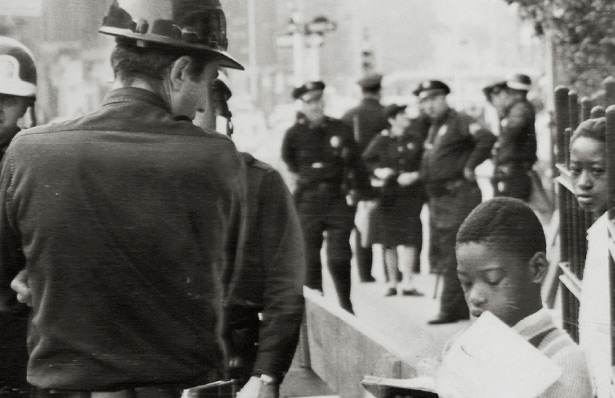 Pitkin Avenue is a three-mile stretch of central Brooklyn beginning just past the eastern boundary of Crown Heights, extending into East New York, and leaving its greatest claim to distinction in Brownsville. From the 1910s through the ’40s, when Brownsville’s population was composed largely of Jewish immigrants, Pitkin Avenue and the various side streets emerged as Brooklyn’s most significant retail thoroughfare, supplying poor and working-class residents with what they needed—vegetables, shoes, chickens—and outsiders with what they desired: refrigerators, sofas, jewelry. The prosperous Jews of Eastern Parkway—the “alrightniks,” as Alfred Kazin, who grew up in Brownsville, described them—typically owned the businesses and supplied the consumer base. In his 2002 book Brownsville Brooklyn: Blacks, Jews, and the Changing Face of the Ghetto, Wendell Pritchett, formerly a law professor at the University of Pennsylvania, noted that in 1942, 372 stores on Pitkin Avenue—among them eight banks and forty-three men’s clothing shops—employed 1,000 people and generated $90 million in annual business, which would translate to more than $1.2 billion today, or roughly the yearly revenue of Zappos.

By the early 1930s, few of Brownsville’s families had managed to join the middle class, but the median income of a family there was still nearly twice that of a household on the Lower East Side. Today, the median household income in Brownsville is nearly a quarter lower than it is on the Lower East Side, a quadrant of the city where in 2013 it is possible to spend $665 on men’s shell cordovan wingtips, and just as much for a room in a hotel whose promotional material describes the surrounding area as Manhattan’s most “authentic” neighborhood. Although the percentage of Brownsville residents living below the federal poverty line has decreased since the beginning of the millennium, from 43 percent to 39 percent, the figure remains remarkable—nearly twice the rate of the city’s as a whole, and thirteen points higher than Newark’s. Brownsville possesses an authenticity for which there is no external market.

One of the most dangerous places in the city, Brownsville remains a nexus of gun violence and all of the anxiety that attends it, with crossfire a persistent worry. In October 2011, a young mother was shot to death picking up her child from school as gang members exchanged gunfire, with one shooter taking aim from a rooftop. Parents are afraid to send children to and from school on their own. Barring absolute necessity, going out at night is something to be avoided. One winter evening, I visited a community center in the Van Dyke Houses on Blake Avenue and met Orlando Santos Jr., the director of a successful after-school program run by Good Shepherd Services. He hadn’t worked in Brownsville very long, and when I asked him how he found the neighborhood, he gestured that it wasn’t as menacing as its reputation suggested. He had witnessed only a single shooting, he told me—just outside Van Dyke—and that was six months ago.

Can This Data-Driven Organization Help Those Most Desperate Escape Life on the Streets?