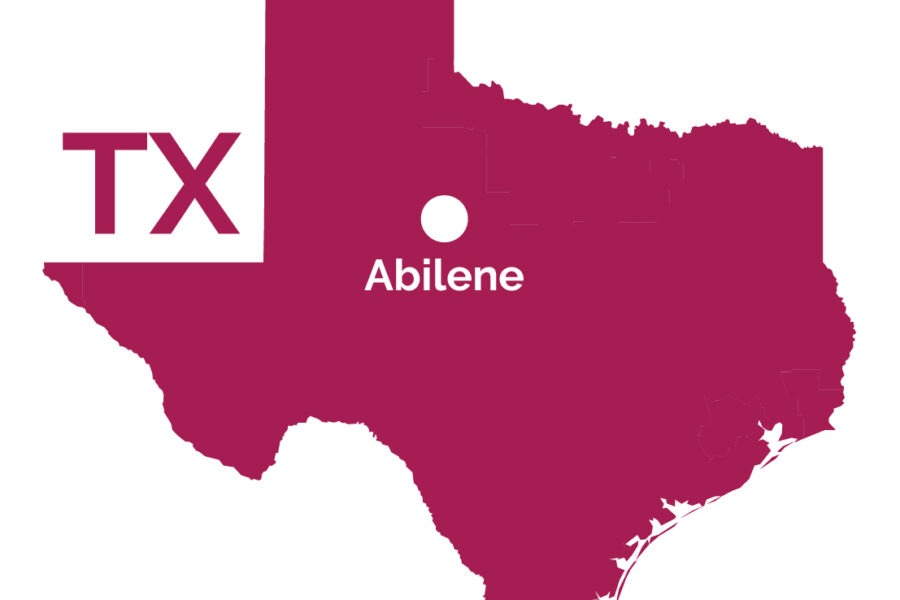 Abilene, Texas, part of the Texas Balance of State Continuum of Care, achieved functional zero for chronic homelessness in November 2019, after reaching functional zero for veteran homelessness in February 2019. It is a part of Built for Zero, a movement of more than 80 communities committed to measurably ending homelessness, one population at a time. The Continuum of Care for Texas Balance of State – Abilene joined Built for Zero in 2018.

A community has ended chronic homelessness when three or fewer people are experiencing chronic homelessness (or 0.1% of the community’s most recent total homelessness individual point-in-time count, whichever is greater). This definition is shared between Built for Zero and the federal government. From November 2019 to January 2020, Abilene reduced that number to three individuals and then to zero, achieving a successful three-month sustaining period of functional zero.

As part of Built for Zero, Abilene changed how its homeless response system works by adopting the core elements of the Built for Zero methodology:

BUILDING A COMMAND CENTER UNDER ONE ROOF

The local Built for Zero team started by unifying the efforts of key agencies working locally to end homelessness. In many communities, local agencies or nonprofits focus on their piece of the solution, without an ability to see how all the pieces in their community fit together. Often, success is defined by each organization’s programmatic goals rather than whether the overall number of people experiencing homelessness is going down.

Abilene worked to reorganize their efforts around a shared goal of reaching functional zero on chronic homelessness. For example, the Abilene team met with a specific homeless provider to truly allow that organization to see where they fit in the process and how they played a significant role in reaching the goal of ending chronic homelessness.

Ensuring all internal players were on a level field was important in enacting this command center approach. During training sessions and coordinated entry meetings with staff, the two Built for Zero Leads — Katherine Bisson, Executive Director at Abilene Hope Haven and Alexzandra Hust, Director of Programs at Abilene Hope Haven — would stress the importance of focusing on their most vulnerable neighbors first, while also taking the time to educate everyone in the room about what that actually means.

Communities in Built for Zero develop by-name lists, which provide real-time insights into everyone experiencing homelessness by name. This enables communities to triage that individual’s needs, understand if their investments and activities are driving homelessness down, and test and innovate ideas that will move people out of homelessness faster.

By August of 2018, the team had created a system that ensured quality data on every person experiencing chronic homelessness and every veteran experiencing homelessness. This data enabled them to understand who was moving out of homelessness, who was entering into it, and who was remaining on the list. As former Housing Navigator Rosten Callarman explained, “We didn’t want to say that we had achieved functional zero unless we had done the outreach to find out who actually was in the streets.” They wanted to ensure every single person experiencing chronic homelessness in their community was known by-name.

“My hesitation in pursuing functional zero for chronic homelessness was being confident that our by-name list was accurate,” said Bisson. “Agencies in our communities have done homeless outreach for many years to provide food and other basic needs to promote survival. However, none of the outreach was coordinated or housing-focused. It was unsettling to wonder if we were missing some of the most vulnerable in our community. We changed this component of our system, which was not quick or easy, but it feels so good to reach functional zero knowing that all of those involved went above and beyond to reach this goal with integrity.”

The team also improved their case management practice, establishing housing-focus meetings with the neighbors that included regular check-ins on aspects they might be struggling with. For example, Hust said, “for a lot of our neighbors it’s been years since they’ve ever paid bills.” Through progressive engagement practices, the Abilene team would offer support on this steep learning curve by reminding neighbors to check their mail regularly or teaching them how to pay a bill online.

Through these intentional case management practices, the Abilene team wants to remind their neighbors that “we’re a kind of bridge that can never be burned,” said Hust.

INCREASING OUTREACH TO THEIR NEIGHBORS

In June of 2019, the team began implementing heavy outreach efforts to connect with their clients or neighbors, as they are called in Abilene. Additional passthrough funding provided by the Ballmer Group allowed them to hire someone to focus solely on outreach. As Hust said, “I think that just knowing exactly where our neighbors were staying and truly being able to interact with them made a difference.”

Even their organization’s Executive Director and Built for Zero Co-Lead, Katherine Bisson, went out in the community and in the woods to find where many of their neighbors were living. “I think that that also provided an opportunity for us to build relationships [with neighbors],” explained Hust. “Relationships alone have quickened the process, because as you can imagine when you’re living outdoors for so long, having any type of trust is still difficult. Trust is a huge, huge factor for our neighbors,” said Hust.

One of the many ways the Abilene team worked to establish and strengthen their relationships with their neighbors was practicing what they call “radical hospitality.” As Hust explained, “Our efforts are to basically treat someone walking into our office as if the mayor were walking into our office. We offer the same, exact accommodations as we would to the mayor: ‘Do you want some coffee or some water? Are you comfortable where you’re at, or is there anything I can do to make your more comfortable while you’re here?’” All this serves to ensure each neighbor they work with has a very dignified experience, while also helping to lower potential barriers to housing.

The Abilene team recognizes that neighbors are often experiencing both significant trauma and a loss of pride when they come to them for help. As a neighbor seeking assistance at Abilene Hope Haven, “You’re having to be vulnerable and to share your life situation to a stranger,” said Hust.

Once the team began establishing their quality by-name list data, they worked on reducing the numbers of neighbors on that list. One key way they accomplished this was preventing any new inflow through an improved housing retention strategy, ensuring that once a neighbor is housed, they’re not coming back out and circulating again through the system. Through monitoring and case conferencing their at-risk list, along with practicing diversion and rapid resolutions for those on the list, the team was able to prevent new inflow. Because of this deep awareness and understanding of their system, and the team’s quick and flexible response to change, Abilene has seen zero inflow to chronic homelessness since October 2019.

As Bisson explained, “It is amazing what Abilene has been able to accomplish in such a short period with true commitment and the ability to adapt.”

Beginning in January 2018, the Abilene team began using their chronic by-name list data to test and improve their homeless response system. They focused especially on improving their rapid resolution practice, which is housing intervention designed to prevent immediate entry into homelessness or to immediately resolve a household’s homelessness once they enter shelter, transitional housing, or an unsheltered situation. Improving this system-wide intervention strengthened their ability to see people’s needs more quickly. By June 2020, the average length of time from identification of a person experiencing chronic homelessness to housing placement was reduced to 48 days.

The Abilene team’s Built for Zero Improvement Advisor, Habiba Rotter, stressed the importance of actionable goal setting, especially in terms of their by-name list data. For example, if they were trying to get a 50% reduction in a certain number of months, that means they will need to house a specific number of people a month. Achieving these specific goals required a variety of improvement projects and systems testing.

Another critical aspect of quality improvement was gaining buy-in from front-line staff members and getting the whole team involved in outreach. The team shifted the way they work and were open to continued change. “They really were a team that was open to working around or within or over anything,” said Rotter. “They really didn’t let bureaucracy get in the way of a lot of things that they had to do in order to get better at what they did.”

Another significant improvement effort involved the verification process — helping providers and the community understand the true meaning and definition of chronic homelessness, so they could then support the Built for Zero team in their work to end chronic homelessness in Abilene. The team also began implementing the verification process earlier, which reduced the time from identification of someone as next on their list for housing to enrolling them in their program. Seeing this system improvement in action garnered more community support, as more providers then wanted to participate in the process as verification sites.

“We could not have done this without our Improvement Advisor, Habiba Rotter, and the Built for Zero team. They helped to keep us focused and always consider the bigger picture when we tend to get bogged down in our day-to-day work. In addition, the moral support that was provided gave us strength to push forward and overcome both external and internal barriers,” said Bisson

“I think really the lesson from Abilene is that there’s no magic formula. It really is about just learning how to work smarter and faster,” Rotter explained. 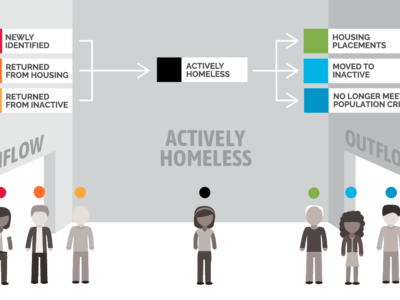 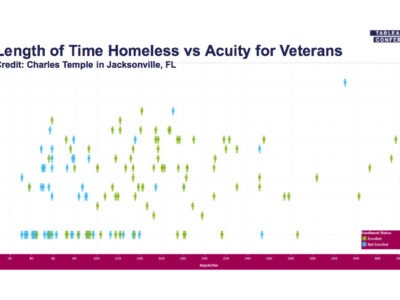