Brownsville, Brooklyn, can be a tough place. I was standing on a street corner a few years ago with colleagues and a New York deputy mayor when a group of armed men in a van pulled up, slid open their van door, and shot and killed a 16-year-old before speeding off. We thought that a car’s muffler had backfired until we saw schoolchildren diving for cover. It all happened two blocks from where we were standing.

The N.Y.P.D.’s effort to reduce the very real threat of gun violence in neighborhoods like Brownsville is to be commended. Stop and frisk, however, casts too wide and clumsy a net to effectively prevent highly organized violent crime like we observed that day.

At the Brownsville Partnership, we used social service data to identify vulnerable parts of the population. Truants are more likely than other high school students to become juvenile offenders. Want to stop high rates of juvenile incarceration? Focus on truants. Similarly, a small percentage of folks in a community, 2 to 3 percent, commit most of the of violent crime. Targeted interventions yield dramatic results.The ad hoc search and detainment of a whole population — young black and Latino men — is a remarkably inefficient solution. While neighborhood residents are often comforted by increased police presence, this type of policing only pushes crime to the boundaries of the policed zone. If cops are on the street, crime moves into the stairwells. 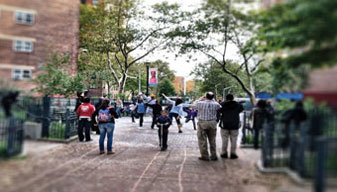